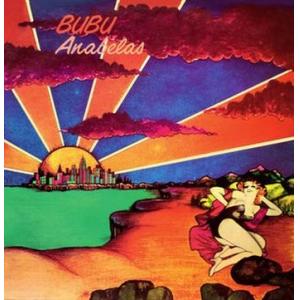 It is not with sheer joy, but with overwhelming jouissance that we undertook the demanding task to reissue on vinyl the behemoth that is called Anabelas. Heralded in its contemporary 70s music press in Argentina as a phenomenal release, and venerably revered globally for many years to come by progrock aficionados as a best-kept secret, this polymorphously succulent and lusciously multi-faceted concept album retains the awe of the vertiginous moment of a newly discovered land and the aura of an authentic artwork (in every single piece of this limited 500 copies pressing). Unfettered by the stealthily eroding repetitiveness that eventually forces aural innovations into the territory of trite and lackluster replicas, Bubu’s Anabelas still beguiles the most demanding listener by dint of its unique compositional trajectory that is marked by the implosive amalgamation of symphonic prog with neo-classical, zeuhl with free jazz, and suchlike interminably discernible cross-pollinations, while being couched in one of the most vividly surrealistic artworks.

Anabelas is a truly remarkable oeuvre to be cherished by collectors who have been kept at a distance in the face of the astronomical prices that are demanded for original copies, inasmuch as by newer cohorts in the prog/avant-garde milieu. With so many flavors parading synaesthetically in an ethereal escapade, Anabelas is equally appealing to the most trained ears to the sonic vicissitudes of Italian prog, inasmuch as to fans of the avant-hard electronics of Add N to X. And there is one more important reason why the re-birth of Anabelas is even more appealing than the original release: the exclusive bonus CD, featuring recordings from two seminal and highly acclaimed live-shows that were performed by Bubu (cf. Bubu’s official biography on PQR’s website). Still here, awaiting to be rediscovered at the end of the rainbow.