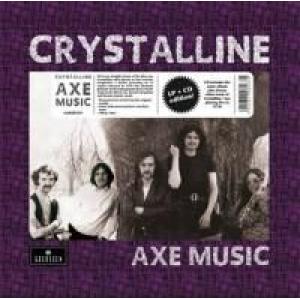 Axe (also known as Axe Music and Crystalline by the time they recorded their rare acetate) were an obscure British psych band leaded by acid- rock guitar player extraordinaire Tony Barford and graced by Vivienne Jones ethereal vocals.
In 1970, they recorded a demo album of which only 12 copies were pressed on a 10'' acetate.

Here's the first ever straight reissue of this legendary artifact, as the previous '' reissue'' on the Kissing Spell label was altered without the band consent and included new remixed tracks, added echo / phasing effects, altered song titles...
Here' you'll find the acetate recordings on its pure form: 100% unadulterated heavy psych and acid- rock sounds full of raw, fuzzed- out guitars and dreamy female vocals. Four impressive original songs plus a long, psyched to the max cover of Love's '' A house is not a motel'' which has to be heard to be believed.

Carefully remastered from an original copy (master tapes were lost) in 24- bit. Unfortunately, no masters survived and no clean copy is known to exist of the original 10", but you'll get the best result for the possibilities. New artwork (the original acetate came in blank sleeve), insert with unseen pictures and liner notes by Paul Cross.
And if all that wasn't enough, this release includes a CD with the same album plus a bonus 8 minute video track featuring colour silent footage of Crystalline / Axe playing live in 1970 with audio from the acetate added. Footage filmed by no other than Steve Giles (Dark)!!!

- '' ...Axe did not make a lot of music, but they made some phenomenal music. Some of the best ever to emerge from the swamp of heavy British psychedelia, certainly some of the rarest'' Paul Cross, Sweet Floral Albion - Laura's Garden

Tracklist: Another sunset, another dawn - Peace of mind - A house is not a motel - Here from there - Crimson nights"