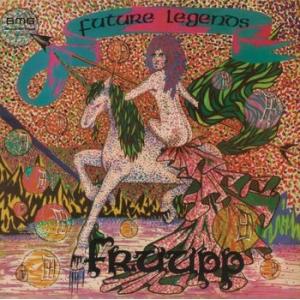 Fruupp is a progressive Rock band, which originated in Northern Ireland but developed a fan base in Great Britain. They released four albums whereas Future Legends is their debut.

The artwork on their album cover was created by bassist/singer Peter Farrelly.

During the early seventies the band played hundreds of gigs and in about two years they put out four amazing albums, a level of productivity that any modern group couldn't begin to fathom. Fruupp's unique blend of Irish folk and art rock music has, like a fine wine, weathered well with time. Adjectives used by reviewers to describe their aural outputs include lush, pastoral, symphonic, dark, ethereal, subdued, manic, dignified, melodic, breath-taking, and artsy-fartsy.

This was a band that pushed the envelope of music of the time, dancing on the dialectic edges of the early seventies progressive rock movement.