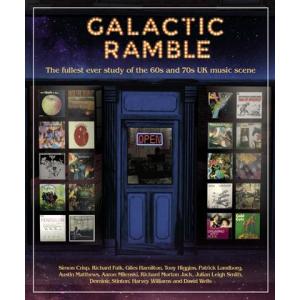 Edited by Richard Morton Jack, Galactic Ramble features several thousand reviews of British and Irish pop, rock, folk and jazz albums issued between roughly 1963 and 1975. It is by far the most comprehensive critical guide of its sort in existence.

The first edition of 3000 paperbacks quickly sold out upon publication in 2009. Second-hand copies have since sold for many times the original cover price of £30.

This revised and expanded second edition is more than twice as long, totalling well over a million words, and has taken a decade to put together. It contains a massive amount of new information and imagery, and completely supersedes the first edition.

The period covered by the book saw a massive increase in the number of LPs released, on both major and minor labels. Many sold poorly and change hands for huge sums today. The aim of Galactic Ramble is to evaluate the music they contain and place them into context with each other, as well as offering accurate factual information about them.

The book covers the vast majority of UK rock, pop, folk and jazz albums released in the period, including major labels, independent labels, private pressings, library music and more. It also covers albums by British artists that were only released abroad.

Greatest hits albums have largely been excluded, as have label samplers (unless they contain unique tracks) and most film and TV soundtracks. Certain genres - ska, easy listening, trad jazz and trad folk come to mind – have not been covered exhaustively, though all are well represented. Finally, most albums that didn’t come out at the time but have since appeared as archival releases are not included.

The long and detailed introduction is by record producer David Hitchcock (Caravan, Mellow Candle, Genesis). In it he describes the British music industry in the period covered by the book, and discusses that part of his career. It has been greatly expanded from the version in the first edition.

The book contains over a thousand rare or previously unseen images, as well as two sections of colour plates depicting collectable LP sleeves.

Wherever possible, new reviews have been juxtaposed with old ones culled from a vast range of vintage British newspapers and magazines, so that both contemporary and modern perspectives can be gained.

Galactic Ramble dates most albums to their month of release, rather than just the year. All catalogue numbers are given, as well as details of any custom inner sleeves, lyric sheets or other inserts or curiosities. Also included are numerous top tens and a list of recommended LPs by each contributor.