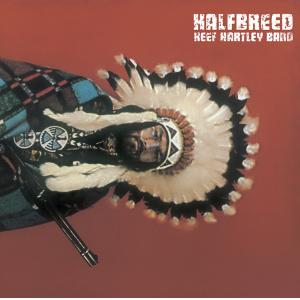 Drummer Keith Hartley was of such musical pedigree that he replaced Ringo Starr in the Hurricanes when Starr joined the Beatles; he soon joined John Mayall’s Bluesbreakers and holds the distinction of being the only musician to accompany Mayall on solo album The Blues Alone. Mayall then insisted Hartley front his own band, which is how the Keef Hartley Band formed. Debut album Halfbreed is a top-notch British blues album featuring future Uriah Heep bassist Gary Thain, guitarist Split James who worked with Martha Velez and Otis Spann, a horn section with fellow Bluesbreaker Chris Mercer, flautist Lyn Dobson who played with Georgie Fame, and the great Harry Beckett on trumpet, not to mention a guest appearance by Mayall himself. This is hard rockin’ blues with some jazz leanings in places and the care and attention given to spatial placement helps to emphasize the skilled musicianship featured, with stereophonic panning allowing us to absorb Hartley’s rhythmic assault with better clarity. This edition comes with bonus track ‘Leave It ’Til The Morning,’ a rare single with a folk-rock influence.