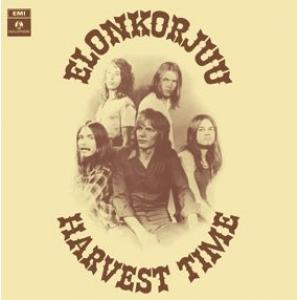 Elonkorjuu came from Pori, Finland and was founded in 1969. At first the sessions were done in a rather dark cellar; the musicians were young, talented and highly motivated. Already in the same year Elonkorjuu won the second place at a competition at Helsinki´s House of Culture. Short time after this the band´s success grow very fast. They toured through whole of Finland and quickly were well known. One of the band´s highlights was the gig at the rock festival in Turku, where they did act big ahead of hundred thousands youths, who went wild about the phantastic band. At the end of the same year they decided to make an LP, titled "Harvest Time". This album recieved cult status of the progressive rock.
The Finnish quintet Elonkorjuu are one of the many little-known bands that did heavy blues/psych with strong prog elements, drawing initially from the schools of Cream, Sabbath and Colosseum but expanding on those influences with soulful church organ and cutting guitar from leader Jukka Syrenius. A killer album from beginning to end. Heavy guitar work all over and great English vocals. ""