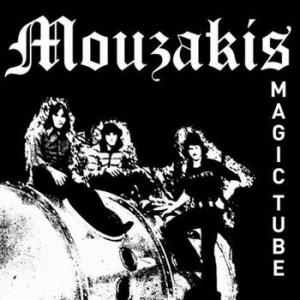 Delaware-based power trio Mouzakis conjured an intriguing sound somewhere between traditional rhythm and blues and garage rock, with psychedelic and hard rock leanings. The band occupied something of a unique space during their short reign during the early 1970s, and it was partly their non-standard outlook that kept the group a trio, since other potential musical recruits simply could not find a way through their multidirectional sound. Drummer/lead singer Eddie Stevenson and bassist/keyboardist Fred Dawson had been playing together in the mid-1960s in The Fabulous Pharaohs, which issued sparse singles on short-lived labels such as Three Star and Reprise, issuing a mix of originals and non-standard cover tunes, before splitting off to form Mouzakis, with a number of guitarists failing to last long, before Sam Stipo stepped up to the plate. Soon Mouzakis were carving out a solid reputation as an enthralling live act on the Delaware and Maryland live circuits, opening for all manner of acts, including soul group The Stylistics and smooth pop/rock act, Chicago. Following the release of debut single 'Don't Want You No More' for Philadelphia's British Main Records in May 1970, debut album 'Magic Tube' was issued by British Main the following year. The album certainly veers all over the map: 'Party Ball' is straightforward rock'n'roll, while 'Lady' and romance bust-up saga 'Both Do Fine' skate the fine line between garage rock and psychedelia. In contrast, lengthy opener 'Magic Tube' reminds of a less-polished Doors and the live cut of 'Rock Around The Clock' has the benefit of unexpected organ. Definitely a one-away release by a difficult to classify band.