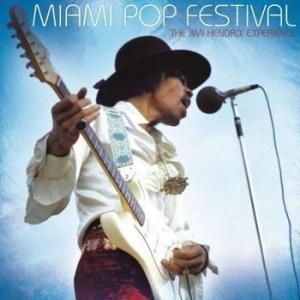 Miami Pop Festival by the Jimi Hendrix Experience is the first-ever release of one of the guitar virtuoso's most sought-after performances, as originally recorded on site by Hendrix's long term sound engineer, Eddie Kramer. The live recording introduces the first recorded stage performances of "Hear My Train A Comin'" and "Tax Free" while showcasing definitive live takes on such classics as "Fire," "Hey Joe," "I Don't Live Today" and "Purple Haze."

The first ever major rock festival staged on the East Coast, the May 1968 Miami Pop Festival was the first event promoted by Michael Lang--who would organize Woodstock, the biggest pop culture event of the decade, fifteen months later--and Ric O'Barry, who had been the dolphin trainer for the popular television program Flipper. Lang and O'Barry had been inspired by the June 1967 Monterey Pop Festival, the groundbreaking gathering where Jimi Hendrix, making his US debut, famously set fire to his guitar at the conclusion of his performance. Lang staged the festival at Gulfstream Park in Hallandale, Florida, securing the Jimi Hendrix Experience as the headline act for the two-day festival.