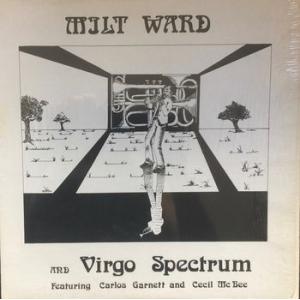 This album, with Milt Ward as band leader and featuring Carlos Garnett on tenor sax and Cecil McBee on bass is fairly rare. Released in 1977 (according to the copyright notices on the labels) on the utterly obscure Twin Quest label, little seems to be known about Ward or the sessions. He did appear as a trumpet player on a few other albums. Given the album’s rep as a “grail” it is surprising how little is known about it, particularly given the line up.

Milt Ward’s sole release as a band leader, the album includes a number of Ward’s own compositions, playing trumpet as well as flugelhorn. It fits under the genre heading of ‘soul jazz’ which could mean almost anything- here, the horns dominate at first. And it’s an impressive horn section that includes not only the aforementioned Carlos Garnett (Mingus and Miles, among others) and Bill Pierce, a stalwart who was the chair of the woodwinds department at Berklee School (known for his work with Tony Williams and Art Blakey), but a host of other horn players with whom I had no real familiarity: Eddie Alex, Glenn Barbour and our leader, Milt Ward.