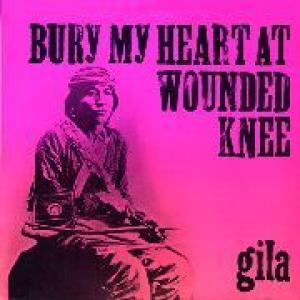 After the break-up of the first Gila line-up -- available are the LP/CD 'Gila' (1971) and a live LP/CD, recorded in 1972 - and Conny Veits move from Stuttgart to Munich, and then founded a new band, retaining the old name. Instead of their former lenghty improvisations, their tracks were now tightly arranged. Their only album, 'Bury My Heart At Wounded Knee', which was inspired by Dee Brown's book of the same title and deals with the expulsion and extermination of native North Americans, features three American Indian lyrics (translated into English) and received good reviews without exception. The LP was released in 1973 on WEA/Warner Bros., while in 1995 a really bad bootleg CD was released by Germanofon, and in 2012 a bootleg LP on blue vinyl. On all these records the tracks are mistakenly in the wrong order. This has been corrected now. The vinyl re-issue is limited and numbered and comes with a four-page insert in LP size.