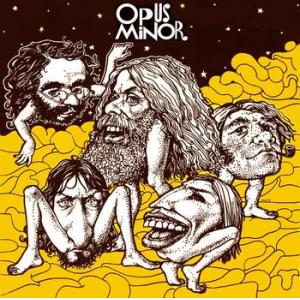 In September 69, at the École Normale Supérieure of Cachan (ENS), three student teachers meet: Jean-Claude Lardrot who is studying applied arts, Jean-Louis Grassi studying maths and Guy Aicart studying civil engineering. They decide to set up a rock band that they will call Opus Minor. The first, who had taken piano lessons and played, in his teens, as a singer-guitarist in bands playing titles from Chuck Berry, Dylan or the Rolling Stones, is focused on the keyboards and the vocals. The second, who had already participated as a guitarist in short lived bands which were more country-folk, focused on the bass and the vocals. The third discovers his passion for the drums. A first guitarist joins them but is soon replaced by Philippe Marcenac, a student in architecture at the Beaux-Arts in Paris. A fifth accomplice, Daniel Reynet, takes care of the sound system and the technical and material matters. At student house parties, Opus Minor plays covers of Cream, John Mayall, Who or embarks on psychedelic improvisations. During the summer of '70, inspired by the hippie movement, the band members get a taste of community life and prowls around playing every night in a club of a holiday village in the Hérault. The band then composes its first titles in English and French, in which we find the post-May-68 spirit. In 1971, Opus Minor wins a student group contest organized by RTL and starts to perform often in various Parisian prestigious schools (Arts et Métiers, St-Cloud, Fontenay and of course in Cachan...). The band appears at Van der Graaf Generator, Lycée Janson de Sailly, and Michel Polnareff for a concert in the Paris suburbs. As well as the Gibus and the Tavern of the Olympia. Invited in June of the same year to the festival of Auvers-sur-Oise organized by couturier Jean Bouquin, Opus Minor and four other bands performed just in time before the rain and everything sank in the mud. But the musicians do not get discouraged and keep on playing. For a year they rented a suburban house, in Villepinte, to practice every weekend and they go back to their rehearsal studio in the basement of ENS Cachan where their adventure began. This is where, from April 28 to May 1, 1973, the original compositions finally published on this album were recorded. But the same year, three of the band members are appointed to teaching positions located in different provinces too far away, which resulted in the band coming to an end.