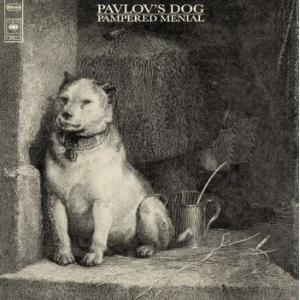 Pavlov's Dog, the 70's AOR / Prog-rock band, was an odd crew. The band combined guitar, keyboards, percussion and bass with mellotrons, flutes and violins. On top of that, singer David Surkamp's voice has one of those 'hate it or love it' voices that's reminiscent of Rush-frontman Geddy Lee's vocal range."
"Pampered Menial"" was Pavlov's Dog first album, originally released on ABC Dunhill and re-released on Columbia in 1974. At the time the band was signed, they received a $600,000 advance from ABC which was a record advance for any new group signed at that time. The songs "Julia" and "Theme From Subway Sue" received the most airplay."
"Pampered Menial"" is a crossover albums of 70's hard rock and progressive rock and is strongly recommended to fans of either of those genres. We're pleased to release this long-lost gem in original gatefold sleeve, this time on 180 grams audiophile vinyl!"