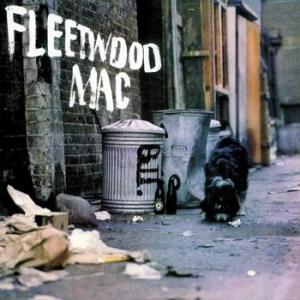 In 1967 Peter Green, Mick Fleetwood and John McVie played in the legendary John Mayall & The Blues Brakers, and were given free studio time during which they recorded five songs.
Peter Green was so convinced of this band´s musical prowess that he formed it on the spot and named it after the drummer & the bass player.
John McVie, however, wasn't convinced yet, and it forced Fleetwood Mac to find a temporary replacement in Bob Burning.
After a short while, however, he was as hooked on the Elmore James influenced British Blues that he left John Mayall to take a risk on a group of unknowns.
The rest is history.

'Fleetwood Mac', the self-titled debut album, was released in 1968, and was one of the highlights of the late British Blues movement, climbing to the #4 slot in the UK album charts without producing one single, and managing to stay in the charts for 37 weeks.
It was a traditional blues album true to form, but one that also showcased Peter Green's budding singing and songwriting skills; 'I Loved A Woman' has a hint of the Latin Blues fusion he would perfect in 'Black Magic Woman' a year later, while 'Looking For Somebody' balanced humour and vulnerability that would come to characterize their style.
This sought-after record is back out on vinyl for the first time in almost 35 years!