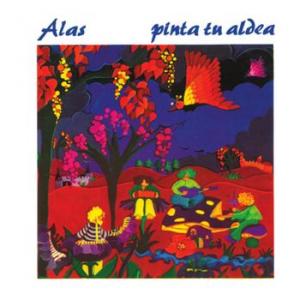 First official release of this one-of-a-kind gem by Argentinean progmeisters Alas, in a strictly limited edition of 300 copies, with a newly designed (and band-approved) back cover. 'Pinta Tu Aldea,' recorded in 1977, and formerly released by EMI in 1983, belongs to the cohort of outstanding artworks that sound as fresh and relevant today, as when they were originally recorded. Here, Alas digress from their ELP-esque affinities which permeate their debut album, in quest for a unique sound that would blend for the first time the avant tango idiom of Piazzolla with the multilayered prog arrangements of Gustavo Moretto, with a helping hand from Carlos Riganti and Pedro Aznar. 'Pinta Tu Aldea' laid the very foundational building block of an eclectic sub-genre, namely, avant-tango/prog jazz and folk fusion. This has nothing to do with tango for purist tango lovers, obviously, but with a freeform adaptation of tango instrumentation and composition paths to the exigencies of to the exigencies of progrock in conversation with jazz-fusion, folk and electronics, culminating in an expressionist landscape of unparalleled virtuosity, a bedazzling puzzle of motifs that might be rearranged ad infinitum in a maze of ever-shifting porous boundaries. This is hardly tango you can dance to, but surely tango to headbang to, inasmuch as cabaret metal might hardly qualify for cabaret enthusiasts. This is tango's unabashed unfettering from its formalist constraints and its squirmish takeover in a hybrid cosmopolitan appropriation.