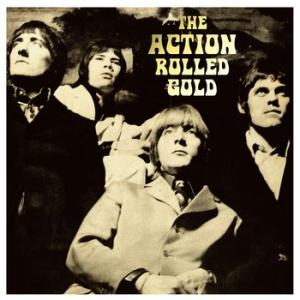 The legendary 1967–68 recordings by UK mod band THE ACTION, registered when they were in transition from mod–beat to full–blown psychedelia, just prior to becoming MIGHTY BABY.

Originally recorded as a set of demos with the intention of obtaining an album deal which inexplicably never materialized, "Rolled Gold" is a collection of brilliant songs, melancholic yet powerful. The Action’s classic line–up of Reg King, Alan ’Bam’ King, Michael Evans and Roger Powell is augmented with the inclusion of new members Martin Stone on guitar and Ian Whiteman on flute / organ. All of them are playing their hearts out: superb harmonies, great guitar work and clever arrangements which show the influence of bands like The Byrds and the psychedelic sounds that were coming from the West Coast and UK as well as jazz giants like Coltrane.

Always the stuff of legend, The "Rolled Gold" tapes were shelved at the time, not released until 1997 when the Dig The Fuzz label discovered them and did a limited LP/CD run.

Out of print on vinyl for many years, we present a new vinyl edition.

If you dig the psychedelic era of SMALL FACES, PRETTY THINGS, THE WHO, plus THE CREATION, NAZZ, TOMORROW, BLOSSOM TOES, THE END or TRAFFIC...look no further.