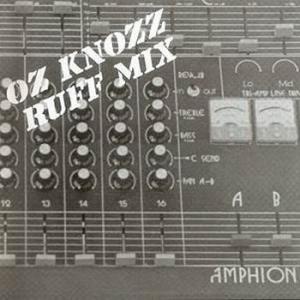 First legitimate reissue of one of the best US private press hard rock/progressive rock albums of the 1970s, from the master tapes. Only 250 copies available. Formed in 1969 in Houston, TX, Oz Knozz's original crew included multi-instrumentalists Jack Alford, Bill Massey and Duane Massey. Alford left the group in 1971 and was replaced by drummer Marty Naul, while the next year the trio was joined by guitarist Richard Heath. The band had also a three-man horn section, which was dropped quite fast, although horns remained a part of the band's sound, even on their rare and epochal 1975 private press debut 'Ruff Mix,' released on the band's own Ozone label. 'Ruff Mix' mainly grooves in hard rock territory, the second track 'Peanut Butter Yoni' sounds a bit like Judas Priest with a proto-metal feeling. Yet the album also has elements of progressive rock, horn rock and pomp rock. Like most bands of the era, the idea may have been to take a shot at a few different styles to see if something would stick_ the theory being that a major label might hear the private album by chance and sign said band so they could open for Led Zeppelin or Foghat's next US tour... or something like that. What separates Oz Knozz from other bands is a strong compositional component; they have plenty of original ideas and muster superb instrumentation. The guitar work ranges from hard and powerful to melodic and bluesy, and is supported by some great keyboard, including awe-inspiring organ and synth waves. The three-part 15-minute 'Doodley Squat' suite features heavy dual keyboard parts, crunchy guitars and expressive vocals; the result is a terrific hard prog track with lot of energy. Strange to say about a hard rock album, for many the standout track is the groovy and infectious horn rocker 'Love Poem,' which sounds like it easily could have been from 1969. High energy and impressive songwriting.