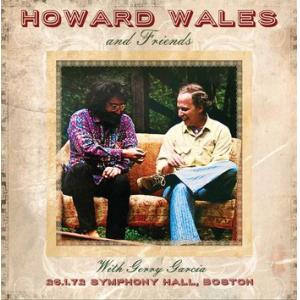 Sometimes referred to as the ‘Hooteroll Band’ after their respected album from 1970, Howard Wales and Jerry Garcia’s collaborative work reached far beyond the expected audiences of Dead heads with their combined acid guitar and Hammond-fuelled funk enterprise comprising several notable names from the Bay Area such as Roger ‘Jellyroll’ Troy (Electric Flag) and Jim Vincent (H.P. Lovecraft). Having originally been conceived on the stage at The Matrix as the Monday Night Band in 1970, the partnership of Wales and Garcia cemented two kindred spirits that would prove to be a potent force. The January performance held at the Symphony Hall in Boston on their 1972 East Coast Tour comprises a majority of material from the celebrated album which would finally get a live airing two years after it’s release and a year after Garcia’s solo LP for Warners in 1971. Vincent and Garcia expose a bounty of talent with intensity as Wales’ Hammond endeavours to provide it’s own personality. Bridged with B.B. King, Bo Diddley and Fleetwood Mac, the band employs it’s own craft with a dose of enigma and effort throughout, ensuring a collectively mesmerising performance.