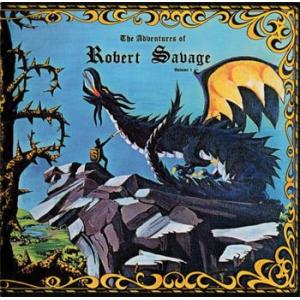 “The Adventures of Robert Savage” is a very obscure psychedelic rock band from the 70’s that hailed from California. There is a lot of heavy fuzz guitar here, excellent riffs and far-out solos, that this guy was obviously heavily influenced by the great Jimi Hendrix.

The band consisted of three members. In 1971 they released an album called The Adventures Of Robert Savage, Vol. 1.Robert Savage was obviously influenced by Hendrix and his album is recommended to fans of hard rock trios with inventive guitar parts. It comes in an unusual mediaeval style cover featuring a dragon…

It contains a pretty impressive set of Hendrix/Cream- inspired gritty and guitar driven psychedelic hard rock (with some white boy blues and progressive moves) dominated by loud guitars, dirty vocals and pounding rhythm section. There is a lot of heavy fuzz here, excellent riffs and long, far out solos.