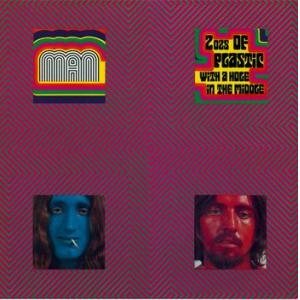 Man is a Welsh rock band whose style are a mixture of West Coast psychedelic rock, progressive rock, guitar driven hard rock, blues and pub rock. Formed in 1968 as a reincarnation of Welsh rock harmony group The Bystanders, Man are renowned for the extended jams in their live performances.

Man was initially signed to Pye Records for whom they recorded their first two albums: Revelation; noted for the simulated orgasm on "Erotica", which received a UK ban, and 2 Ozs Of Plastic (With A Hole In The Middle)

2 Ozs Of Plastic (With A Hole In The Middle) captured something of the group's live fire and their concert performances often followed pretty much along the lines of the track listing. While their first album had a strong British feel, the follow up was nicely spiced with touches reminiscent of several American west coast bands such as Quicksilver Messenger Service and Frank Zappa's Mothers Of Invention.

The album cover was intended to be impossible to look at. An optically unstable geometric pattern was chosen and a clashing contrast of colours applied. The band each had their faces painted a different unnatural colour and the resulting photographs were distributed around the pattern. Lettering was outlined in 'Yellow Submarine' rainbows.