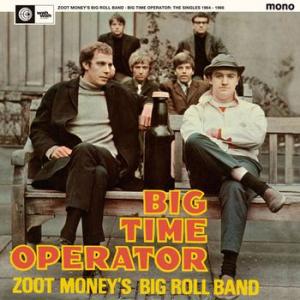 Zoot Money and his Big Roll Band —featuring among others future Police guitarist Andy Summers— were one of the biggest stage bands of the first mod era. This LP compiles all the 45 sides released as Zoot Money's Big Roll Band between 1964 and 1966, including some smash dancers like their takes on Uncle Willy, Jump Back or the fabulous title track Big Time Operator among others. Also included is an alternate take of their LP track It Should've Been Me, previously unreleased in vinyl format.

Here's 16 sweaty mod-jazz / R&B smashes to keep an allnighter live in a 500 copies only limited edition housed in a nice three back-flapped vintage style sleeve, remastered sound and an insert with photos and liner notes.