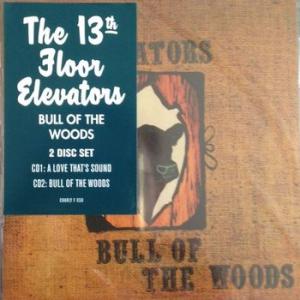 It is presented in brilliant jewel case packaging complete with a detailed 16-page booklet written by band expert Paul Drummond.

During a turbulent time for the Elevators, caused by drug issues and incarceration for vocalist Roky Erickson, lead guitarist Stacy Sutherland ran the recordings for these two albums, featuring a frequently-changing line-up.

The result is this fine post-psychedelic rock album in Bull of the Woods, which features on Disc 2.

Audio restoration and final mastering to disc was handled by Andrew Thompson at Sound Performance in 2008.

The remastering and remixing were completed in 2007 by Walt Andrus and was engineered by Stuart Sullivan.

R.E.M., The Jesus And Mary Chain, Primal Scream, ZZ Top, Spacemen 3, Echo and the Bunnymen, Julian Cope and many more have covered their songs.

On 10th May 2015, the surviving members of the band (Roky Erickson, Tommy Hall, Ronnie Leatherman and John Ike Walton) performed a 50th Anniversary reunion concert at the Austin Psych Fest.

So significant was the event, it was covered by the media worldwide and in the band's honour, the name of the festival was changed to Levitation - a key track from 'Easter Everywhere'.

"The fearless trailblazers of psychedelia and one of the most kick-ass rock bands ever...

For two or so years they burned with a flame so fierce that 40 years on they still remain an inspiration" MOJO "This album more than holds up against its predecessors: Sutherland's lovelorn songs inhabiting a bluesier cosmic sound reminiscent of The Grateful Dead, Moby Grape or Blue Cheer - for whom the Elevators were an undeniable inspiration" Uncut

Bull Of The Woods