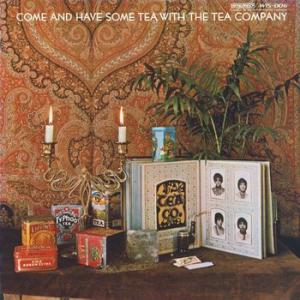 USA 1968
From New York City, The Tea Company was one of the early birds from the US psychedelic underground scene, with an LP on the market, originally released on Smash Records, in `68. This album stands for the evolution of the 45 rpm teen-psych-garage bands to the upcoming LP-generation with extended improvisational parts. Tea Company evolved from the Naturals as precursors to the psychedelic sound, with Joe Meek influences. They were founded in 1963 and played the big ballrooms supporting Mamas and the Papas, The Lovin' Spoonful, Bob Dylan, Ritchie Havens, and many others. Tea Compnay´s controversial and intense "East-Indo Sound", reflects "an assemblage of possessed rock performers; retinue preparing the unusual; alternating with the roots of soul...whose purpose is to cause sensation, due to stimulation of the auditory centers of the brain!" - They became popular in the US underground, also in San Francisco for spectacular live shows and lyrical hippie statements. The music is inspired by the Beatles, using exactly the same equipment as them. Tea Company played with lots of freaked-out-echo-organ/-guitar noises on a 12 string Rickenbacker and various stereo madness reminds strongly of Syd Barrett´s spirit but more driven by hard hittin´ drums. Inspired by Vanilla Fudge, the Tea Company also did an outrageous 9 min. version of "You keep me hangin on", which is celebrated among 60s collectors as a true milestone. The album is a mindblowing intense production (CD includes 4 bonustracks by the NATUALS). This CD-release (remastered) captures perfectly the sound-experiments in a fresh and intense direction! The 8p colour booklet contains a nice bio and photos. - A must for those who wanna feed their minds with unusual heavy-psychedelic Rock-ROOTS!