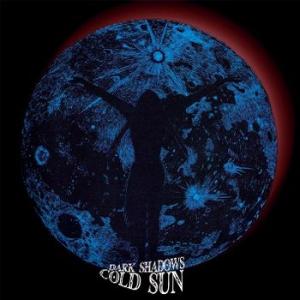 First time available on CD, Cold Sun from Austin, Texas was recorded in 1970 in the legendary Sonobeat studios, where the Mariani and Johnny Winter first LPs were produced. The Cold Sun band are considered contemporaries of Velvet Underground and The Fugs, often listed as being in a similar vein but inspirations
for this unique piece actually go back to the desperated, haunted Joe Meek. All songs lyrically express dark, mystic poetry with the true 60s psychedelic floating/distorted fuzz spirit presented in short compact mini-epics along with several mind blowing long tunes, such as "Ra-Ma" (11 min), "Here In The Year" (9 min) and "Fall" (7 min). Discovered by Rockadelic Records of Dallas, Texas in 1991, the Dark Shadows album saw the light of day the next year as a limited LP version, to become today one of the most important and revered US psychedelic underground albums from the early 70s. ---(Rockadelic heard it in the form of an old scratchy acetate that one of the Cold Sun band members had made in order to be able to play the recording at friends` parties on their turntables. The acetate only contained 2/3 of the songs but so greatly impressed them that Rockadelic managed together with bandleader Bill Miller to release the complete sessions from mastertape.)--- Autoharp wizard Miller eventually spearheaded Roky Erickson`s international debut as the Cold Sun band joined forces with Roky in 1974 and became BliebAlien, later evolved into The Aliens and backed Roky on his famous albums and historical concerts.---
Carefully remastered from the mastertapes, this album will bring new rewarding listening experiences in expanded fidelity, plus 2 unreleased non-album songs, authentic Live/Concert recordings of "Live Again"(10 min) and "Mind Aura"(7 min). The fidelity of these reel to reel Live recordings is also remarkable. The CD and Vinyl issues will both have an extended booklet with liner notes by Jello Biafra plus rare photos and other surprises. The Vinyl issue is packaged in a luxury foldout cardboard cover as Dragonwyck, Phantasia or Mystic Siva and contains an extra 10" bonus record.
According to Patrick (The Lama) Lundborg from Lysergia.com: "Best Rockadelic LP ever, and in my opinion the best Texas LP of the era. In his book, "The Acid Archives" Mr. Lundborg wrote, "A wet dream for fans of American psychedelia, and imagine how close it came to remaining unreleased. A carefully crafted trip through sun-baked Texas desert peyote landscapes, so real that you can actually feel the blazing heat." Listed in the Top 10 in "Acid Archives" the "Dark Shadows" LP by Cold Sun also elicits this review : "The top tracks like "South Texas" and "Ra-Ma" reach into intense desert hallucinatory states that are almost too good to be true." ---- Enjoy this ONE- HOUR psychedelic Happening, a "must-have" 60´s/70´s heavy uber-psych masterpiece ! "