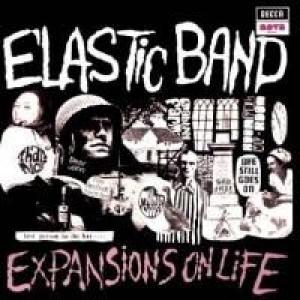 Released 13/04/09. The starting point for Sweet guitarist Andy Scott, The Elastic Band emerged from the ashes of mid-'60s Welsh soul revue the Silverstone Set to make a couple of highly-regarded 1968 mod pop/blue-eyed soul singles for Decca. "

But a year on the underground gig circuit supporting the likes of Hendrix and Pink Floyd impacted significantly on the band's musical direction. When they returned to the studio in the summer of 1969, it was to cut Expansions On Life, a dazzling 50-minute collection of late psychedelic/early progressive rock moves which suggested that the new-look Elastic Band could be genuine contenders. Inexplicably, though, Decca delayed its release until March 1970, by which time the band had fallen apart, lead singer Ted Yeadon having left in December 1969 to replace Steve Ellis in the Love Affair. As a result, Decca barely promoted the album, which duly sank without trace"

Established for the last couple of decades as a heavy duty rarity amongst collectors of vintage British psychedelia and progressive rock, Expansions On Life now receives what is, incredibly, its first-ever official UK reissue. With a 16-page booklet, extensive liner notes, restored artwork and master-tape sound as well as some priceless photographs, this definitive reissue of Expansions On Life also features all four tracks from the band's equally collectable 45s, including the regularly compiled psychedelic pop nugget '8 ï¿½ Hours Of Paradise'."

Mother Goose / Last Person In The Bar / Crabtree Farm / Has Anybody Seen Her? / Dear John / Room Full Of Room / That's Life / Life Still Goes On / Sad Jazz / Sunrise Work Till Sunset Bonus Tracks- Think Of You Baby / It's Been A Long Time Baby / Do Unto Others / 8ï¿½ Hours Of Paradise"