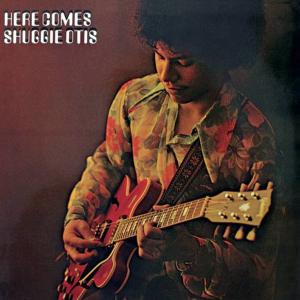 180g vinyl exact reissue of Shuggie's timeless 1970 debut. "Produced and arranged by his father, R&B legend Johnny Otis, the set features nine original cuts co-written by the pair, and in some cases others, and one written by Johnny with Dan Aldrich. The album is evenly divided between vocal tunes and instrumentals. The cast for these sessions included Johnny, Wilton Felder, Stix Hooper, bassist Al McKibbon, Preston Love, Jackie Kelso, Plas Johnson and a string section. 'Oxford Gray,' the album's opener, is an instrumental written by Johnny, Shuggie, Felder, and Hooper. Unlike anything that ever came before it, it's a baroque blues tune that features Shuggie playing both electric and acoustic bottleneck slide, a harpsichord, strings and a groovy little backbeat that walks the edge of blues and funk. It feels like a suite because of its many composed sections, but Shuggie's guitar is pure improvisational poetry. This is followed by the beautiful, psychedelic pop of 'Jennie Lee.' Shuggie's vocals weren't quite there, and were still somewhat tentative, but his gorgeous, Albert King-inflected guitar solo is right in the pocket, and stands in wonderful contrast to his acoustic string in the verses. The horns are restrained and regal, and the textural palette of the cut is lush and spacious. There is plenty of rootsy playing here too, such as on 'Bootie Cooler,' a Stax-styled blues groove, and the name-dropping shimmy and shake of 'Shuggie's Boogie,' the wig-tightening funk of 'Hurricane,' and the reverentially gritty 'Gospel Groove.' It closes with a modern soul rocker called 'Baby I Needed You,' with a killer hook in the refrain even if Shuggie's vocal doesn't quite pull it all off. Here Comes Shuggie Otis stands the test of time over 30 years later, and stands as a hallmark of songwriting, improvisation, and production acumen." -- All Music Guide