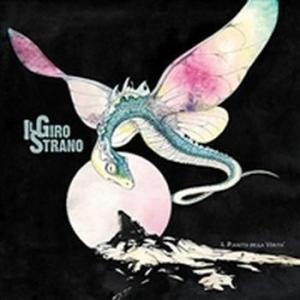 Here presented on CD are stunning, previously unissued recordings of an Italian six-piece progressive rock band from Savona. The music is partly jazz oriented and dominated by powerful vocals, sax and keyboards. Coming with remastered sound, this release is recommended to fans of a.o. Flea, Rockys Filj, Procession, Ibis and New Trolls.

The band was formed by young musicians active in Liguria during the the 60s and 70s previously members of locally established bands such as: One Way, Voodoo, Tramps and others. In those days, the band had no chance of releasing any album, however, they left various tape recordings on reels and audio cassettes, preserving a musical heritage of great historical and artistic value. Led by the powerful voice of Mirko Ostinet and featuring great sax and keyboard playing skills, il Giro Strano created a remarkably original style of Italian progressive rock music with jazz nuances, reminiscent of bands such as Flea, Rocky’s Filj, Procession, Ibis, New Trolls. All tracks have been digitized, equalized and mastered in order to obtain the best possible sound quality.They will be available as Double Vinyl with a fold-out cover with an original ’72 artwork by Armando Mancini, remarkable former Up & Down Studio artist, well known in the golden progressive rock era, for creating artwork for bands such as Quella Vecchia Locanda, Trip, Il Rovescio della Medaglia and many more. The album is a real treasure not to be missed.