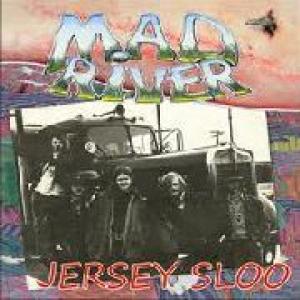 SHAGRAT RECORDS is pleased to announce the release of 'Jersey Sloo' by legendary late 60s West Coast band, Mad River. The release includes a soft-cover 36 page book and 12" 5-track EP pressed on 180 gram vinyl, featuring previously-unissued music by the band in a limited edition run of 500 copies. Mad River formed at Antioch College, Yellow Springs, Ohio in 1965 and, inspired by what was happening in San Francisco, moved to Berkeley in early 1967, just in time for the Summer of Love. During their brief time together they released a now highly-sought-after 7" EP and two albums for Capitol Records. "

The Shagrat release is a substantial addition to their catalogue. Housed in the same sleeve as the vinyl 12", the 12" x 12" 36pp, full colour, mini-coffee table book features a 26,000 word history of the band written by Ugly Things journalist David Biasotti, revealing many unknown stories and details about this legendary, Berkeley-based quintet. The book is profusely illustrated with many photos and other memorabilia which have never been seen before. The band played all the infamous psychedelic ballrooms such as the Avalon, the Fillmore and the Straight Theater, sharing the bill with the likes of Country Joe & the Fish, Phil Ochs, the Vanilla Fudge and Santana, who opened for them on a number of occasions. Both their albums are now rightfully regarded as classics of the era. Acting as a kind of soundtrack to the book, the 12" record contains five cuts that have never been officially released before, including the four numbers the band cut in Dayton Ohio in early 1967 as a demo before they re-located to California. These show that whilst the band was influenced by the likes of the Paul Butterfield Blues Band, Country Joe & the Fish (whom drummer Greg Dewey eventually joined and played Woodstock with) and their friends the Youngbloods, they were also pretty fully formed before they set off for the West Coast, as the embryonic Windchimes included here testifies. It was former Youngblood Jerry Corbitt who produced the other long-lost gem from 69, Jersey Slooin this set - showing that away from the long flowing psychedelic numbers, the band could also write concise, accessible, two-minute rockers (even if the lyrics were completely whacked out!). Drummer Greg Dewey takes a rare lead vocal on this one, which with its overtly funky bass lines, might be considered a frenetic companion piece to Country Joe & the Fishs infamous Rock and Soul Music."