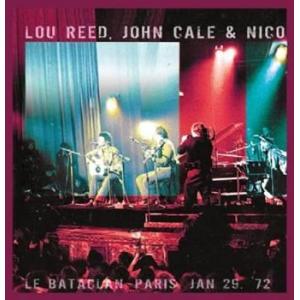 To the surprise and delight of their growing fanbase, in early 1972 rumors began to circulate that Lou Reed, John Cale and Nico would be performing together
again. In fact they only played one show, at the small Bataclan club in Paris on January 29th. On it the trio perform a cross-section of Velvet Underground and solo material in acoustic settings, offering a unique opportunity to hear familiar songs by three of rock’s most enduring cult artists in a fresh style. It makes its long-awaited return to CD here, together with background notes and two rare tracks culled from a rehearsal held in London shortly before the concert.