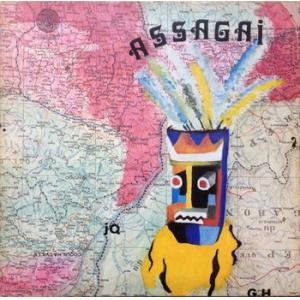 Assagai’s debut for Philips’ progressive subsidiary Vertigo was realised in 1971 to quiet applause. Critics soon became favourable as Afro-Rock gained a foothold as the ‘next big thing’ and it wasn’t long before they would make their (only) appearance on Top of The Pops.

Their journey in London’s predominantly progressive underground music scene was brief, but also established a further chapter in the annals of afro-rock alongside Black Velvet, Osibisa, Thors Anvil, Uhuru and the Cosmic Grass Band. Numerous musical figures were assembled from the South African and Nigerian communities resident in London at the time with contributions from Dudu Pukwana, Fred Coker, Ayinde Folarin (Demon Fuzz) and Fred Fredericks (Jimmy James and The Vagabonds). An unlikely partnership with progressive-folk legends Jade Warrior would provide backing on their Zimbabwe LP, co-writing material for their self-titled debut. Unbeknown to Jade Warrior at the time, they were part of a combined contract with their labelmates.

Assagai is as fresh and alive as it was when it was recorded in 1971, hypnotic in it’s rhythm and tantalising in its mix of punctured brass and provocative vocals. Their ruthless brand of handsome rhythm offers copious potent vibes, but simultaneously employs a simple narrative achieving an elementary perspective of London’s rapidly changing times.