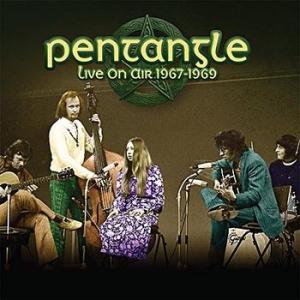 Pentangle, including the Danny Thompson Trio with John McLaughlin, live on air 1967-1969

The high profile names of John Renbourn and Bert Jansch remain coveted enough to warrant excitement at any retrospective release, but combined with Danny Thompson and Jacqui McShee, this is a delightful insight into one of Britain's finest folk rock bands to emerge in the late '60s.

Pentangle's legacy lies in an abundance of fragile, acoustic wonder spanning six albums with Transatlantic and Reprise Records from 1968 to 1972. Between the studio, television and festival appearances, Pentangle visited venues such as the Playhouse Theatre and Paris Theatre for the BBC.

These pristine sessions reveal a valuable insight into the creative mindset directing the band in their heyday. Prominently featured here are the only known recordings of Danny Thompson with John McLaughlin and Tony Roberts from 1967 that would provide a vital bridge to the formation of Pentangle.

London Calling proudly presents the Pentangle and associates, live in session from London, 1967-1969 and includes an interview with Jacqui McShee.

TOP OF THE POPS, 22ND NOVEMBER

TOP OF THE POPS, 24TH APRIL