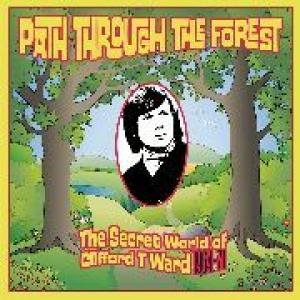 "The Secret World Of Clifford T. Ward 1964-1971". When singing schoolteacher Clifford T. Ward finally made a commercial breakthrough in the early 1970s, it brought to an end nearly a decade of toil within the soft white underbelly of the British pop scene. Path Through The Forest: The Secret World of Clifford T. Ward 1964-71 assembles his early work for the first time, featuring his scarce 1960s psych-pop singles as leader of the Secrets and a breathtaking treasure trove of locally-recorded demos and works-in-progress recordings, including two versions of a song that is now revered as a genuine British psychedelic pop classic, Path Through The Forest. A prodigious collection of beguiling ballads and melodic, hook-laden pop songs, Path Through The Forest reveals that, some years before the winsome singer-songwriter glories of Gaye and Home Thoughts, aspiring pop star Cliff Ward was already a highly significant talent. Some demos have only previously been released with inappropriate 1990s instrumental overdubs: these are now restored to their original state, and are now taken from the master-tapes for the first time At least half of the 57 tracks are previously unreleased in any format, and most are taken from the original master-tapes 16 page booklet includes rare photos and memorabilia"