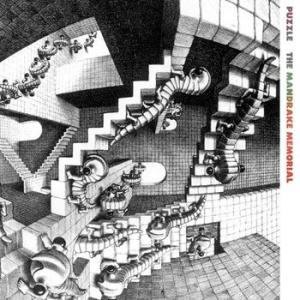 The fabulous third LP by Mandrake Memorial, one of the best bands of the US psychedelic sounds history, is the release chosen to open our new Wah Wah Deluxe series. This marvelous 1970 LP from the Poppy label will be reissued for the first time ever on full 180 gram vinyl glory, housed in its original Escher gatefold sleeve and complete with a colour insert that will reproduce the original LP insert plus will contain some interesting texts courtesy of Poppy label founder Kevin Eggers and Mandrake Memorial member Craig Anderton.

For those unfamiliar to this top band's sounds we'll just add that their three LPs shall be up there with the best works of the best bands that came out from the States in the psychedelic era. Think of The West Coast Pop Art Experimental Band, Pearls Before Swine, United States Of America and the likes. "Puzzle" is a masterpiece that not only benefits from the master work of the Mandrake members, but also from that of producer Ron Frangipane. The combination of talents delivers a perfect mix of classic psychedelia with beautiful orchestra passages."