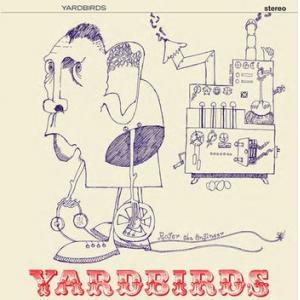 Set your mind back to the cool and groovy era of the 1960s UK, when rock bands ruled and the world really was ‘a-changin’’. At the forefront of that rock revolution was a hot young band, the Yardbirds, one of the world’s first truly progressive groups.

Rated by many critics and collectors as one of the greatest recordings of all time, the all-original ‘Yardbirds’ album, released in July 1966, was a Top 20 UK hit and became known as ‘Roger The Engineer’ due to guitarist Chris Dreja’s quirky cover design.

The album yielded the smash hit single ‘Over, Under, Sideways, Down’ and other exciting performances such as ‘The Nazz Are Blue’ and ‘Jeff’s Boogie’, spotlighting ace guitar legend Jeff Beck, whose experimental and pioneering use of Fuzz and Sustain effects brought a new dimension to the sound of rock.

This is an essential 1960s collectors’ LPs to add to your collection – here it is, available once again in mono version!