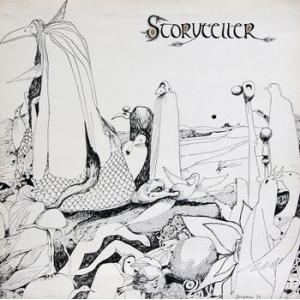 Around 1969, after being a part of the band The Other Two on Decca Records, working with people like Chuck Berry, Duane Eddy and Jerry Lee Lewis, and touring with Chuck Berry and The Animals, Caroline Attard joined a new band that was being formed; Storyteller. A quintet who followed their own inclination, ignoring current fashions and just doing what seemed to come naturally, Storyteller is a crate-digger’s delight. Up there with Fairport Convention, Jefferson Airplane and Steeleye Span, Storyteller were steeped in folklore tales such as on ‘Ballad Of The Three Laps’, bringing the true spirit of folk alive in their own unique way. With songs written primarily by Roger Moon, and Terry Durham as muse of inspiration with his paintings and wonderful Yorkshire stories, Storyteller’s debut has the authentic and honest vibe of the real McCoy.

No longer confined to being coveted by collectors and those in the know, this lush remastered reissue via Svart Records comes on gatefold vinyl with updated liner notes and interview. If you treasure Folk, Prog and Psychedelic Rock, make sure this is a tale you don’t miss out on!