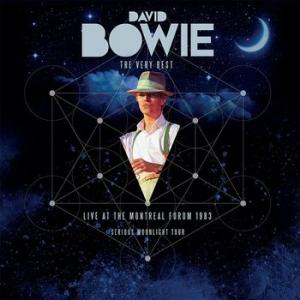 David Bowie’s sold-out 1983 tour, Serious Moonlight, was the biggest of his career to this point. Bowie embarked upon the tour to promote his 15th studio album Let’s Dance, produced by music maestro and Chic guitarist, Nile Rodgers. Racking up 98 dates across 15 countries, it sold in excess of 2.6 million tickets worldwide, delighting die-hard fans and bringing this more ‘accessible’ Bowie to a whole new generation of audiences. Bowie, and long-time collaborator Carlos Alomar, conceived the set list as a showcase for his body of work spanning some 15 years. The concert featured here took place at the Montreal Forum in Montreal, Canada, on 12 July 1983, broadcast on the King Biscuit Flower Hour radio show. It was the first of a two-night stand at the venue and rewarded audiences with fan favourites from 13 studio albums. From Space Oddity from his 1969 self-titled second album, all the way to the (then) present hits from Let’s Dance, the Montreal crowd were taken on a rocket-fuelled tour de force of some of Bowie’s greatest hits.