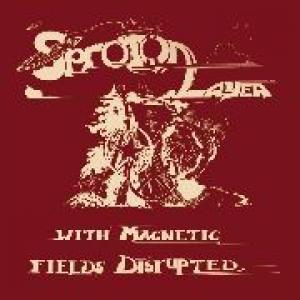 SPROTON LAYER was a psychedelic rock band based in Ann Arbor, Michigan, which thrived from the fall of 1968 through the summer of 1970. They began under the name "Freak Trio" - three hyperactive brothers, Laurence, Ben, and Roger Miller who became, at the young ages of 14-16, addicted to Pink Floyd's "Piper at the Gates of Dawn" when it came out in 67! Their unique and euphoric creation of music ranges from progressive-acid-punk to heavy psychedelia with catchy chord changes and Spaghetti Western Ennio Morricone flashes, with epic results. The energy of "With Magnetic Fields Disrupted", which was recorded in 1970, is just unbelievable. Twelve strong, intense space music episodes of destruction and rebirth with NO FILLER! Journalist Michael Azerrad described their recordings in his book OUR BAND COULD BE YOUR LIFE as "...a valuable document of an amazing band that sounded like Syd Barrett fronting Cream". The album was first released in 1991 by New Alliance Records, but it did not catch much recognition among the '60's collector freaks. Here is the next chance to discover the whole story of one of the "almost forgotten" US underground art-performance groups. Forty minutes long, the album was remastered from the original tapes creating a fresh, organic and punchy sound. The booklet features extended band info and about four dozen artifacts including drawings, set lists, photographs, journal entries and more. After Sproton Layer, all Miller brothers contributed to numerous bands such as Destroy All Monsters, Mission Of Burma, and M3 . Truly a mind-expanding album!"