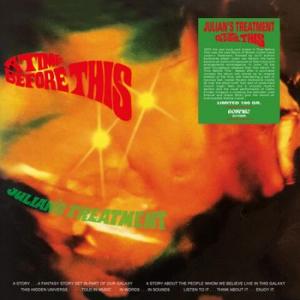 Fully licensed, limited to 500 copies on 180gr vinyl. 1970 the year prog rock broke! 'A Time Before This' was the sole album of British cultish band Julian's Treatment. Fronted by sci-fi author/keyboards player Julian Jay Savarin the band became an extra-cult because of their lyrics and arrangements extravaganza. Savarin - who later embraced a solo career - was born in Dominica and moved to Britian in the early sixties. He started rehearsing with John Dover (bass), Del Watkins (guitar), Jack Drummond (drums) and Australian born Cathy Pruden (vocals). In june '70 the label Youngblood released their first album 'A Time Before This.' Based on a survivalist concept the album still stands as an original artefact of the time, still maintaining a sort of baroque feel. Leader Savarin's keyboards maybe all over the place (with that sort of proto-hard church organ feel), but a virtuoso rhythm section and the vocal performance of Cathy Pruden (imagine a crossing line between Julie Driscoll and Grace Slick) give the record an embraceable feeling overall.