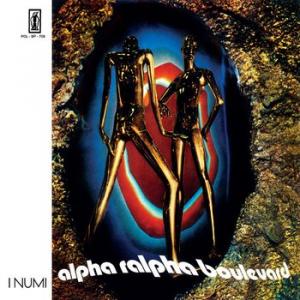 "Alpha Ralpha Boulevard" is the only album released by I Numi back in 1971: issued on Polaris label (the same as I Teoremi) in a small batch of a thousand copies, it is today one of the rarest Italian progressive rock LP's. Already reissued in CD format by AMS Records, it is finally, for the very first time in almost fifty years, reissued on vinyl with gatefold cover, a faithful reproduction of the original version.

I Numi were founded in 1967 by musicians from three different beat groups. Their musical evolution was very rapid: from psychedelic / beat to covering Anglo-American hard-rock bands (Deep Purple, Free, Grand Funk Railroad), to the final maturity of the early '70s, when they eventually recorded their debut album, entirely sung in Italian. Thanks to the artist and friend Guido Bolzoni, who made available his unpublished compositions, the band worked on some material that was arranged in an excellent, elegant, ethereal way, ending up in the seven tracks of "Alpha Ralpha Boulevard".

Instead of coming out too late like some Italian prog gems, this LP had maybe been released early, and anticipated some trends and certain original music intuitions, such as the Leslie-filtered guitar, the modulated spinet in a rock key, the usage of phaser and the prepared piano. The revolution called "Storia di un minuto" still had to come out at the beginning of the following year...