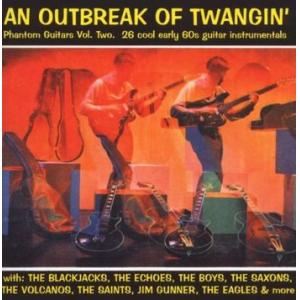 For everyone who enjoyed Phantom Guitars, and also for those who never heard it, here's a great new selection of classic guitar instrumentals from the early 1960s. Most of the tracks are British, but there are a few European acts included as well. Welcome to 26 slices of music so evocative you can almost taste the candy floss, almost feel the buffeting of the dodgems, almost smell the perfume of the beehived beauties. If you ever wanted a funfair in your own living room..this is the next best thing. If, on the other hand, you never fancied a roller coaster in your residence, this is definitely a far better option. You'll swoon to a combo from Gloucester, part of whom ended up in an Israeli prog band, a solo outing from the guitarist of The Tornadoes, an early aggregation of The Peddlers, an Australian Hawaiian guitarist, a Frenchman who became the first ever Caucasian to stand for the Japanese Parliament, Bristol's top guitar twangers and many more. Me? I'm off for another go on The Waltzer.