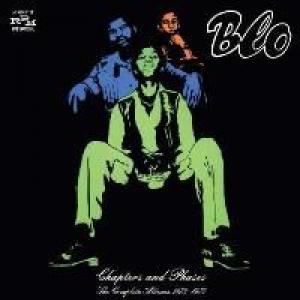 Released on 28/09/09 . Lagos-based trio BLO shook the Nigerian scene to its foundations with their their Afro-rooted rock music. Their live debut in December 1972 found 10,000 new converts chanting we want BLO over and over again. Their Afro-delia looked far afield for inspiration: drummer Laolu Akintobi said we were listening to Grand Funk Railroad and The Isley Brothers and thought we should be able to do this in an African way. A further inspiration wasGinger Baker for whom both Akintobi and BLO sBerkley Jones played and toured with in 1971."

BLO'sfirst two albums, 1973'sChapter One and 1975'sPhase 2, are amazing fusions of traditional rhythms and American psychedelia that evoke a spacier Tago Mago -era Can. Original copies of each sell for £200 and up. Chapter One'shighlights include the psychedelic instrumental Miss Sagit with its snakey fuzz guitar. Equally far out is Chant To Mother Earth, where a hypnotic three-note bass line tops shuffling drums, choppy guitar and distant chanted vocals. Phase 2'swah wah guitar and funk takes their Afro-delia onto the dance floor. Press reports of the time describe BLO asAfrica'sfirst rock band. They had an electronic cosmic sound that deserves total world-wide attention . "