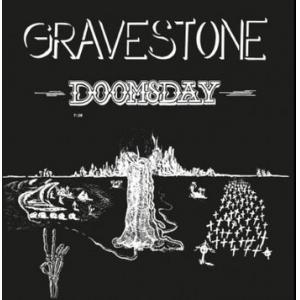 This is an official reissue on vinyl supported by the bandmembers Wolfgang Rittner (lead gt) and Rudi Dorner (rhythm gt). The recordings took place in February 1979 at the AVC Studio in their hometown in the Munich area. All songs were written by Wolfgang Rittner. Bonus track Flying (orig. by UFO) was also recorded during the sessions for the album and newly remastered for this issue. Gravestone is perhaps best known for their 80's heavy metal albums, but the band started as a psychedelic krautrock group. The line-up faced lots of changes in the 80's compared to their earlier years. Doomsday was their only album released in the 70's and it includes a mostly instrumental jam band-oriented style. It sounds like a mid-70-s doomy-krautrock, heavy and sinister album. We will recommend it for real proto-doom fans and fans of classic krautrock with psychedelic hints - both will be satisfied well. All titles do their job very well. Even if the instrumental work isn't anything exceptional the band still sounds great. Featuring some fine guitar playing by Wolfgang Rittner, the band reminds of early UFO, with that space rockin' vibe. Check out the instrumental 'Live in the Coffin' and the fantastic 'Corrine'. A clue to the band's roots is found in the bonus track, a version of the song section from UFO's classic opus Flying.Doomsday is a very solid krautrock disc which is also damn rare as the original pressing. Album comes in an exact reproduction of the original cover sleeve and included a 4-sided cover sized insert sheet with bandstory and a lot of photos. Secret Tip!