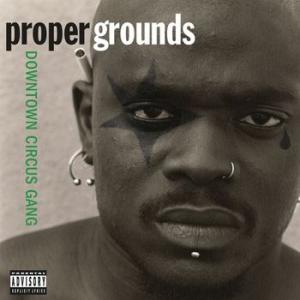 Proper Grounds was an alternative rap-metal band from Los Angeles that first formed in 1988. After being discovered by Madonna and signing to Maverick Records, they released their first and last studio album Downtown Circus Gang in 1993. Proper Grounds was able to merge the gritty realities of life on the street with the intensity and velocity of heavy metal. Formed by frontman The Sandman (who is also on the cover of the album) and bass player/producer Danny Saber, they had a deep-rooted social consciousness that neatly subverted the mindless violence and material worship that engulfed rap in the Nineties. They called their particular brand of noise “anguish rap metal”. Soon after the release of Downtown Circus Gang, Proper Grounds disbanded and rap-metal moved to the suburbs where iconic bands such as System Of A Down and Papa Roach found their origin.

Downtown Circus Gang is available on vinyl for the first time as a limited edition of 1000 individually numbered copies on translucent green coloured vinyl and includes an insert.