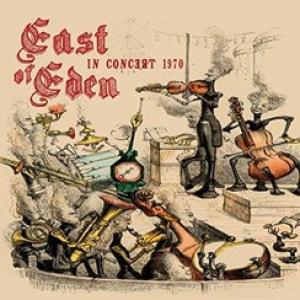 East of Eden, live in concert 1970 (April, August and September)

In the late Sixties and early Seventies, East of Eden were one of the hardest working bands in the country, but countless personnel changes and a curious hit single obliterated the original purpose of the band. Yet when they started out, they were at the forefront of experimental and progressive music of the era. Since then, they have largely been overshadowed by the million-seller names such as King Crimson, The Nice and Yes, and their uncharacteristic hit Jig-a-Jig only served to damage their artistic credibility and intent. East of Eden found their niche with electric violin, blues guitar, saxophone and an underlying jazz instinct coupled with a generous degree of psychedelic menace. They managed to record two albums in their 1969/70 heyday, but their radio sessions from the period remain more elusive.