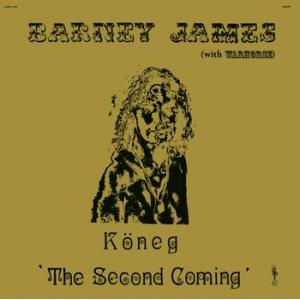 All of Warhorse back their drummer, Barney James, on his unknown 1975 heavy prog concept album, Barney writes and sings all the tracks and it contains some of the finest performances by Warhorse lifted by Barney’s superior vocal. It’s heavy but complex, laden with lead guitar and keyboards, and follows a theme of finding glory in death through the journey of Odin’s son, Koneg - yes it’s the bonafide death-prog concept album that time forgot. Some killer soloing guitar leads end the lp as Koneg, limbs torn on the battlefield, finds his personal Valhalla.

Only one copy of the lp was made as an acetate demo to try to get a record deal, but Punk ensured it was shelved. The acetate has a single andmade metallic gold cover reproduced here with added info as a gatefold, sleevenotes by Rick Wakeman - his old pal, Barney was the drummer for Wakeman during his classic mid seventies period. He also played in many other bands such as Gracious and Legend, and before that saw active service as a Commando in the British Military. The album is just 23 minutes long, it’s all that survives, and is issued with the kind permission of Barney’s two daughters. Potentially as valuable as Dark