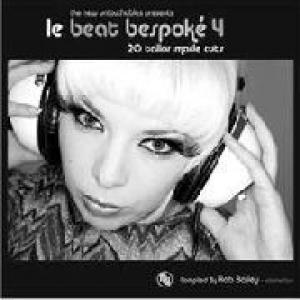 "Le Beat Bespoke" is now a major international event every Easter in London.You may well have stocked volume one, two or three of the record which accompanies it every two years already? In that case, youll probably also be aware of how popular these records are. Restored and mastered to the highest standard on both formats and sequenced like a fast-moving D.J. set, the albums marry seemingly disparate styles into one satisfying sound experience. We think volume four is the best one yet, but well let you be the judge of that. In this collection are often obscure and overlooked underground 'sixties to early 'seventies dance gems from all parts of the world.In some cases, these are so obscure that we are able to find little or no information on the artists. DJ and compiler Rob Bailey (a.k.a."Dr.Robert") has played these sublime sounds on dance floors all over Europe (and beyond).The originals are tried and tested at London club nights like the Mousetrap, Crossfire, Timebox and Zoo Zoo. There, the cool and curious collective gather for nights of hipshakin fun.Once satisfied that these strange intoxicants have no serious side effects, we feel obliged to supply them to other switched-on people across the globe, via this series of compilations. TRACKLISTING: Side 1: 1. VOODOO MEDICINE MAN - JERRY & JEFF 2. FALSE ALARM LOVE - PEACEFUL COALITION 3. BROTHER - THE PAPER TRAIN 4. HA LESE (LE DI KHANNA) - THE NEW LIFE 5. ITS MY LIFE - THE TAGES 6. EG VEIT AO PU KEMAR - TRUBROT 7. FEELIN - JOY UNLIMITED 8. RIGHT NOW - JUSTINE Side B: 9. THIS WORLD - CHRIS CARPENTER 10. SPACESHIP LOVER - PAUL ST.JOHN 11. IM THE UNIVERSE - SIMON SCOTT 12. ITS GETTING HARDER - MACEYS WINDOW 13. NO THANKYOU MR. PUSHER - BIG TOM 14. KING OF SIAM - EAST OF EDEN 15. BYE BYE CITY - LE COER 16. COMIN ON DOWN - THE TWILIGHTS"