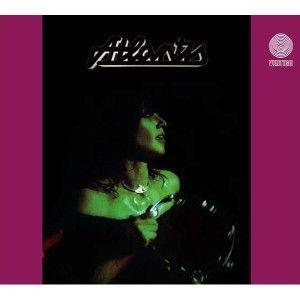 After three LPs, two singles and countless concerts in Germany and abroad German popfans' favorite child has gone at the age of almost three years. The cause of death were musical differences".

In an obituary the highly recommended rock band Frumpy said farewell in August 1972. But at the same time the musicians announced their comeback under a different name. And they kept their promise: Even before the last album "Frumpy live" was released, singer Inga Rumpf, keyboardist Jean-Jacques Kravetz and bassist Karl-Heinz Schott joined with drummer Curt Cress and guitarist Frank Dietz. They founded a new band called Atlantis. In a letter to "Atlantis Scout" Inga later recalled the reasons fo the new name: "Dear Mr. Thorwald Franke, I have been very interested in the myth of the sunken continent. That is why I called my band Atlantis. I really believe that Atlantis lay near the Canary Islands in the Atlantic Ocean "behind the columns of Hercules", as Plato wrote. The sea bottom is at risk of an earthquake, and it is possible that Atlantis sunk because of a disaster. All the best, Inga Rumpf." (www.atlantis-scout.de)

Indeed, the legendary sunken continent has inspired the fantasy of numerous artists, writers, painters and film directors from the ancient days to present. Just like the Greek philosopher Plato (427 to 347 b.C.) many other authors like E.T.A. Hoffmann, Michael Ende and even cartoonist Walter Moers wrote about Atlantis. In 1962 Atlantis was mentioned in an episode of the Perry Rhodan series. In 2001 the Disney production "The Lost Empire" was launched, including a new version of Donovan's hit "Atlantis", a world wide hit originally released in 1968.

With a well known name like this the quintet had to deal with high expectations, but Atlantis could not only take on Frumpy: The new band even outnumbered the success of the predecessor. After finishing the debut album the new band toured Great Britain as a support for Procol Harum and Traffic - "Let's Get On The Road Again" was one of their songs. In spite of the success the line-up changed for the second album: Frank Diez and Curt Cress left the band, and Dieter Bornschlegel and Ringo Funk replaced them on guitar and drums. "It's Getting Better" was a motto in 1973. But while the popularity of the group increased, the struggles behind the scenes did not end. Jean- Jacques Kravetz left, Reiner Schnell joined for a short period, and then Adrian Askew became the new keyboardist. Alex Conti replaced Dieter Bornschlegel on guitar. Surprisingly all those changes did not do any harm, Inga Rumpf stayed the undisputable centre of Atlantis. Looking back she says: "It was a continuous enhancement: In the beginning I played concerts in Germany with The City Peachers, with Frumpy I went to England and Atlantis toured America in 1975!"

The same year, on the peak of the career Atlantis released the double album "Live", recorded at the "Fabrik" in Inga's hometown Hamburg. The opening track is a kind of central thread for the music and the meaning: "Friends" was played ever since when Inga and her friends met again. This live recording proves brilliantly the development from the City Preacher to the "Rock'n'Roll Preacher".