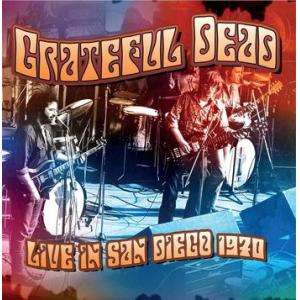 In January 1970, the Grateful Dead were starting to reap the benefits of their new album Live/Dead, released in November 1969, which was receiving plenty of airplay now that FM rock stations were being established all over the country. With their most commercially successful albums Workingman’s Dead and American Beauty just around the corner, the band was nearing a different high and returning to their folk/blues roots transforming the trajectory of their career in a matter of weeks. A Saturday night date in San Diego with a Bay Area line-up featuring Sons of Champlin and AUM gave LA Dead heads a fun night out that simultaneously would herald a turning point in the legacy and fortune of Garcia and the boys. Rox Vox very proudly presents the entire original KPRI-FM broadcast of the Grateful Dead, live from the Golden Hall, San Diego, 10th January 1970. Professionally re-mastered original FM broadcast with background liners and rare archival photos.