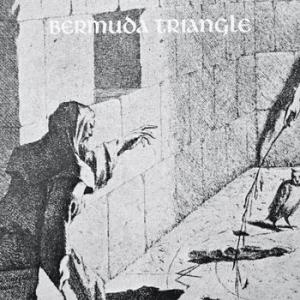 You guessed right...this is another extremely rare offering from the Eastern shores of the USA. Released as a private pressing on the aptly named Winter Solstice label (cat Number SR 3338) Bermuda Triangle who hail from Long Island New York released this gem in the height of Punk ..1977!. A combination of The Farm Band and Bobby Brown ( the solo act from early 1970's California), Wendy Carlos meets Joan Baez the band were made up of a female singer/bassist/ Female drummer/violinist and a guy who sings and plays the electronic auto harp/organ and piano. The sound is totally lost in time and transports you back to the care free days of the early seventies and is extremely trippy. You have to check out the wah wah auto harp, the weird percussion and bass, a great listen almost pre dates the current folktronica scene. This wild album has to be heard and is quite superb from folk to reels to country all bathed in this misty auto harped glory. So then a piece of Psych folk returned from the murky depths (Bermuda Triangle!!!) by Radioactive.
Track Listing 1. Nights In White Satin 2. Right Track 3. Dream On 4. Lark In The Morning/Swallow Tail (trad) 5. Free Ride 6. Standing Together 7. Louisiana 8. Night Train 9. Wind