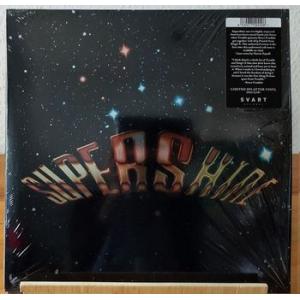 King’s X bassist/vocalist Doug Pinnick joined forces with guitarist Bruce Franklin and drummer Jeff Olson both formerly of cult-legend Doom band Trouble, drummer Jerry Gaskill (King’s X), Wall Farkas (Galactic Cowboys) on Hammond organ, and Heather Crow on backing vocals, for this one-off super stellar side project. Supershine is an uplifting sermon of groove-based 70’s rock with touches of psychedelia and ferocious metal outbursts. All in all it’s a heavy rock escapade that has to be experienced.

“While most side projects fail to live up to the hype, this is one that exceeds expectation on a grand scale, confirming that the chemistry between Pinnick and Franklin shines ever so bright.” – Popmatters.com

Supershine’s musical stew includes many ingredients, but simplicity and roots rule the day here, with healthy doses of Ten Years After, Pink Floyd and Hendrix Experience vibes throughout. A cover of Grand Funk Railroad’s “Shinin’ On” provides the link to the past that Supershine so eloquently captures. Tipping their hat to Black Sabbath and the pantheon of Classic Rock legends along the way with frenetic solos and heavy paced riffs, this Supershine record is a roaring gem.

“I think there’s a whole lot of Trouble and King’s X fans that don’t know this record ever existed and have yet to hear it. When I made it, I loved making it, and I loved the freedom of doing it because it was the first thing I’d done apart from Trouble. ” – Bruce Franklin

A treasured album that will be enjoyed by fans of King’s X, Trouble, Atomic Opera, and Queens Of The Stone Age, “Supershine” was produced by Bruce Franklin with Doug Pinnick and was mixed and mastered by Ty Tabor (King’s X). This authorised reissue is the first time this underrated cult item is available on vinyl, with silver laminated sleeve, supernova splatter vinyl, insert and liner notes by Martin Popoff.