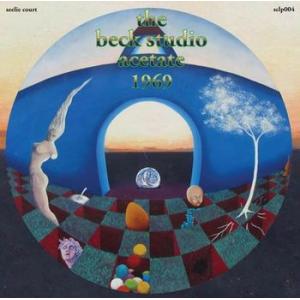 This album was cut in Northampton’s Beck studios circa 1969 and thought to be connected to Axe’s lead guitarist, this band remain completely unknown - only one battered acetate exists which has been held in a private collection for decades, it has track titles but no band name, with all research drawing blanks.

Regardless, this is arguably the finest example of blistering undergound heavy prog jamming ever graven in acetate or vinyl. And the band are at the top of their game, not a dodgy private press, it’s the real mc coy, a band that’s honed a perfect organic sound, with fantastic interplay, male and female vocal leads, and a guitarist completely on fire, possibly Axe’s Anthony Barford (rip) as theorised by Dark’s Steve Giles...we can’t be sure. Just 4 long tracks, 24 mins, if you like Heep, May Blitz, and a touch of Jefferson Airplane, you need this. And the final track is a space ballad with the girl on lead vocal, and she outclasses Grace Slick and Julie Driscoll. Fact. Ranks with Dark. Valued in excess of £10,000